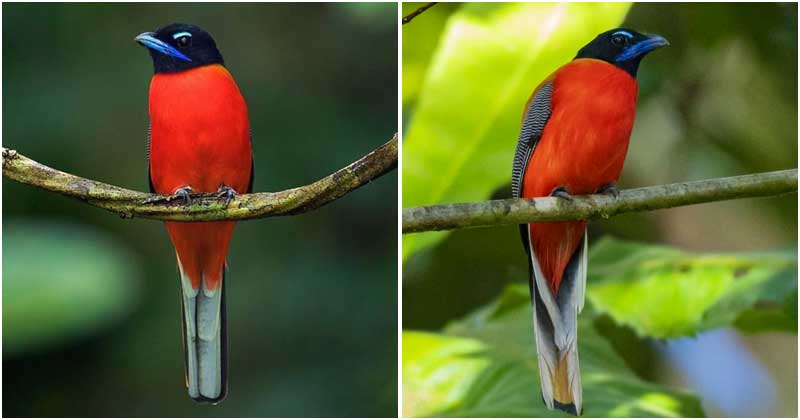 The scarlet-rumped trogon can always stand out from the crowd. The reason is very clear, right? These birds have prominent blue eyebrows that you can’t find in other birds. Their bill is blue, too, creating a striking contrast with their black face. The other conspicuous feature of this bird species is the scarlet underparts and rump. The scarlet shade itself can grasp human attention. Do you agree? The wings of these trogons are also worth praising. Both male and female birds have densely barred wings, next to the brown back and tail. Unlike male birds that are described above, female scarlet-rumped trogons have an orangish rump with a yellow breast and pink-red belly. Regarding their diets, these birds mainly dine on insects, other arthropods, and fruit. But they sometimes prey on small vertebrates like lizards, for food. They also eat caterpillars. During the breeding season, this bird species digs its nest into rotting wood or built-in termite nests. Female birds then lay 2-4 eggs in and incubate them for 16-19 days. Bird moms feed the chicks for around 23-25 days, until they are fully-fledged. Currently, the population of the scarlet-rumped trogon is in decline. The main cause is the rapid continued deforestation.

A Bird Covered In A Colorful Riot Of Electric Blues And Orange!