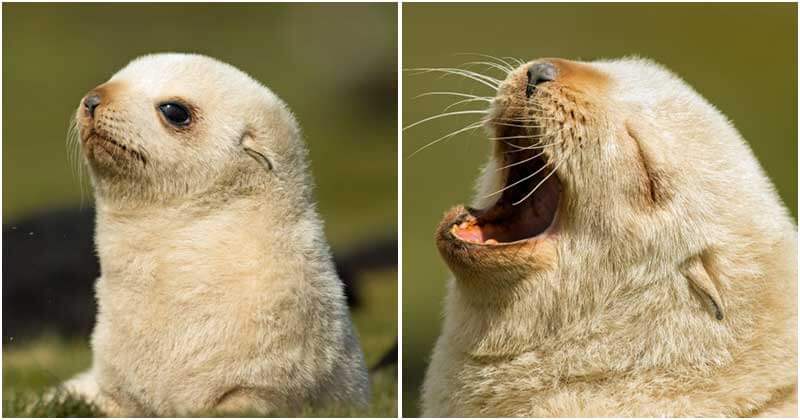 I agree that there are many extraordinary animals out there. Some were born with distinctive skin, albino or melanistic, making them stand out from the crowd. This adorable baby seal is a great example. The pup is extremely rare as it has blond skin and fur. Do you know that blond seals make up less than one percent of the fur seal population? Some “odd” animals become an outcast in their colony but luckily, this baby seal doesn’t. It’s treated fairly by its fellow species and considered one of the gang. The cute ginger seal pup was captured on camera in the South Georgia Islands earlier this year. Roie Galitz, a renowned wildlife photographer is the person who took these photos. “I spent almost two hours next to this sweet fur seal cub,” Roie said. “It posed for my camera in such an adorable way that it was difficult to leave him and carry on for other photography opportunities.

As you can see, the unique creature loves rubbing noses with its friends. He also enjoys rolling in the grass during sunshine, like other fellows. 10+ People Living With More Than 3 Pets Reveal What It’s Like, And It’s Truly Hilarious!

20+ Pets Who Make Humans Jealous Of Their Vivid Facial Expressions

Purple-Crowned Fairywren, A Stunning Little Chubby Bird That Is Worth Your Attention

10+ Pets Who Frequently Take Over Their Owners’ Personal Space