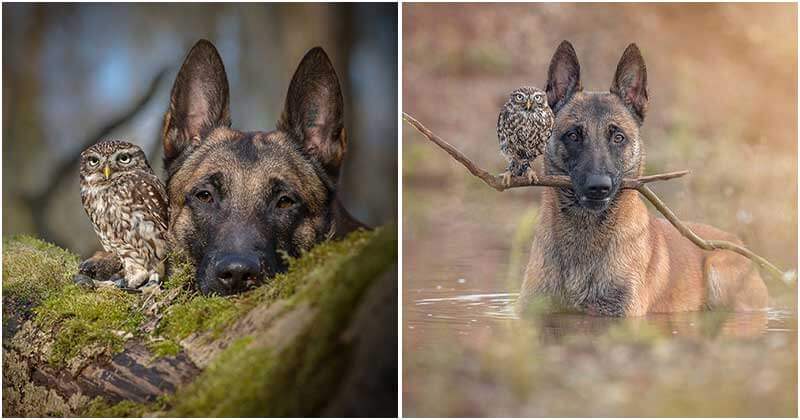 The stories of friendships born between animals of different species are not uncommon.

But I wouldn’t have believed that an owl and a dog could become the best friends of until I saw these adorable photos by Tanja Brandt, a professional animal photographer and collage artist in Germany. Ingo the Malinois shepherd dog and Poldi, the cute owl, seem very happy to cozy up to each other for photoshoots, no questions asked.

Ingo always wants to keep Poldi close by and always offers his love and protection. Poldi “doesn’t know how to live free”, according to Tanja.

“I go outside with them together — Poldi on my hand, Ingo is free running,” said Tanja. “(Referring to the owl flying free) Not so with Poldi. It’s too dangerous. Every cat would kill him, he don’t know hows to live free.”

“Sometimes, Ingo will go for a walk with Poldi hitching a ride on his back. Other times, the duo will simply snuggle up together, with the petite Poldi finding a warm spot to nestle, like under Ingo’s chin, or behind his paw.

Occasionally, if Ingo is fetching something, Poldi will take the opportunity to land and grab a new and different vantage point.” Poldi the owl was the smallest hatchling of 7. He almost didn’t make it out of his shell and is lucky to be alive. Poldi is a bit more vulnerable than his brothers and sisters. He hatched two days later than his siblings and is quite tiny compared to other owls. In short, he needed more attention and care than others. That is in sharp contrast with Ingo, who has experience protecting others. The Belgian Shepherd comes from a family of police dogs and has definitely had his tough moments in life. “Ingo, somehow sensing that Poldi was vulnerable, decided to assign himself the role of protector and best friend,” and the rest is photo history.

“Poldi does have a special lady now, and Ingo is a dog with a busy interspecies social calendar, so these best buds sometimes find they have other responsibilities. Still, whenever they can, they come back to one another, and enjoy just hanging — two unexpected friends who totally adore each other.” If you like these photos, be sure to visit Brandt’s site, because Ingo has a whole lot of beautiful animal friendships, be they other Belgian shepherds or other fierce birds of prey besides Poldi.

Brandt creates animal photos and collages professionally, so she seems to have a lot of cooperative models to work with! 10+ Pets Who Love Their Owners More Than Anything

20 People Who Didn’t Want To Own Pets, But Can’t Live Without Them Now

10+ Heartwarming Photos That Will Make Your Heart Fill With Glee