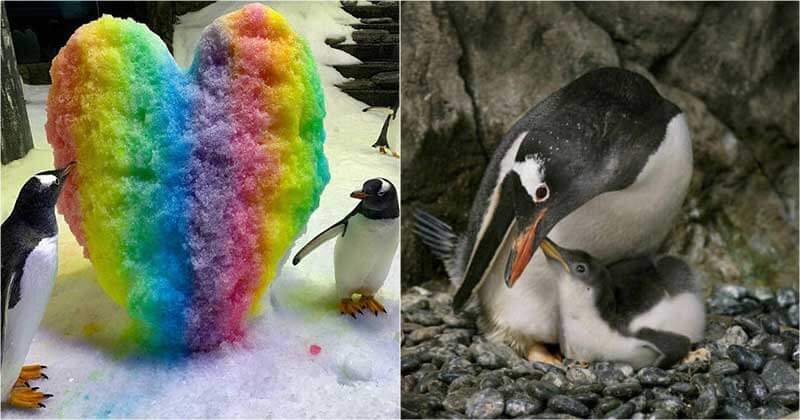 Same-sex couples can still be good parents. They love their children and spend the best for them. This also happens with animals. Sphen and Magic, the gay penguin couple at Sea Life Sydney Aquarium is a great example. Sphen and Magic bonded 2 years ago, in 2018. They used to take swims together and wouldn’t part. The couple began building their own nest soon after the breeding season started.

The pair are the only same-sex couple at the Aquarium where they’re living. The two were given a spare egg to hatch after the zookeepers notice them trying to hatch a rock. You can watch the loving video here.

The couple had their first child, Lara. She is now out and enjoying her adult life. But both Sphen and Magic love the feeling of being parents. They hatched a rock.

Witnessing this, the zookeepers gave the pair a neglected egg, enabling them to become proud dads for the second time. They are the most lovable penguin parents out there. Watch the video of the pair hatching their second egg here.

Sphen and Magic are attentive and incredibly caring. This is why the staff give them eggs to foster if one of the penguin pairs at the Aquarium has too many eggs or are not good at looking after them. “So when we needed a foster couple, they were an obvious choice. After the success Sphen and Magic had incubating and raising Lara 2 years ago, we knew that if we needed to foster another egg, they would be a great option.” the Aquarium’s spokesperson said. The pair is very excited to have a second child. They build a special bond with their children. “The parent birds treat the chick as their own. They lovingly feed it, keep it warm, and defend it from any passersby.” Recently, Sphen followed their kid closely on his little expeditions away from their nest. The little chick has grown big enough to take small adventures.
Same-sex couple like Sphen and Magic are very common in animals. There are approximately 450 species exhibiting same-sex behavior. “Penguins, including Gentoo penguins, are among the many species in which male-male or female-female pairs occur frequently. Adopting of eggs in the wild can occur with an abandoned egg; however, it is likely that this egg could be infertile, which is why it has been left.” the spokesperson said.

Streaks of Blue And Violet Tones, This Bird Looks Like It Came Straight Out of a Fairy Tale (Gallery)

Meet Ollie, The Polite Cat With The Amazing Expression

30 Photos Of Animals That Show What Motherhood Really Looks Like