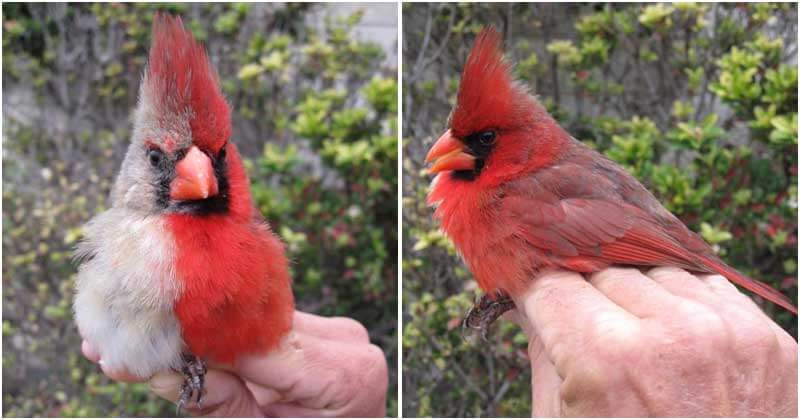 An extremely fascinating and rare species of bird have been observed: a half-vermilion, half-turtledove cardinal. The anomaly is called ” bilateral gynandromorphism ” half of the animal’s body is male and the other half is female. This condition is thought to result from an imbalanced distribution of sex chromosomes in the early stages of embryonic development.

Ginandromorphs can have both male and female genitals and are often sterile. Ginandromorphs are rare but not impossible to find. This phenomenon occurs in birds, many insects and crustaceans. They are probably present in many more species than we can imagine, but experts are not able to notice them in all the specimens because not all have such clear distinctions between the male animal and the female animal.

Cardinals are the most well-known sexually dimorphic birds in North America, so the anomaly is immediately noticeable. What then makes these species so fascinating? Most animals affected by gynandromorphism are sterile, but this specimen may not be because the left side (where the ovary is located in birds) is female.

In profile, it looks like any other bird, but if you look at it from the front, you will see what nature is capable of.

20 People Who Share An Unbreakable Bond With Their Pets

20 Pet Photos That Show Family Is The Best Thing Ever

Animals In Love Are So Beautiful, Proving Through 25 Photos