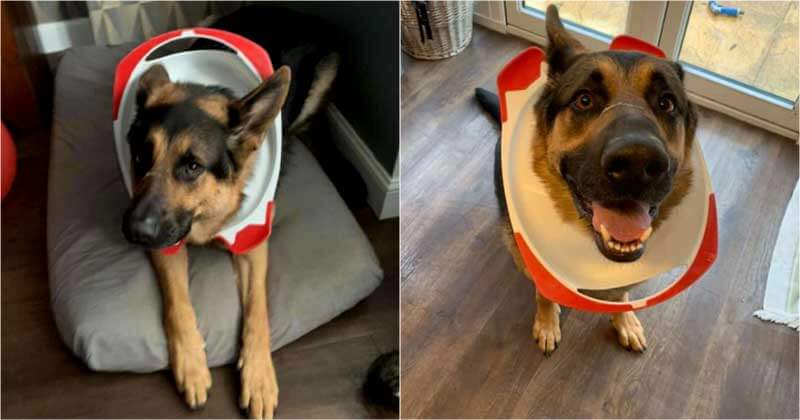 All dogs may sometimes make trouble, even good boys and good girls. The reason is that they get involved in things they shouldn’t. If their owners tell them not to do (or shouldn’t” do) something, they will be more curious about it. And, when they stay at home alone, make will make their own adventure.

The dog named Rocky in this story does the same. He sneaks into the bathroom and gets the toilet seat stuck on his head. The adorable furry friend finally knows why his mom does not allow him in there. Rocky is a friendly giant. He has a strong bond with his human siblings and is always gentle with them. The giant with puppy soul is also scared of things like pheasants and fireworks.

But the gentle Rocky sometimes gets himself into trouble. One recent incident is that he sneaked into the upstairs bathroom when no one was at home. He just wanted to learn why his mom told him not to go there. “Rocky is not allowed upstairs but he literally goes there every time he’s home alone,” Gosia Zywicka Neto, Rocky’s mom, told The Dodo.

When Neto returned home, she found that Rocky managing to lock himself in the bathroom. She came close to see what was happening and found that Rocky was being stuck with his sibling’s toilet seat on his head. The sneaky dog tried his best to remove it but he couldn’t.

When Neto came home, she noticed that Rocky wasn’t there to greet her and was immediately confused and suspicious. She headed upstairs and found that Rocky had somehow managed to lock himself in the bathroom. She quickly freed him — but when he emerged, she saw that he had also somehow gotten his sibling’s toilet seat stuck on his head. When the dog spotted his mom, he felt guilty and embarrassed. The good boy was caught red-handed. And this turned out incredibly hilarious. No one is perfect.

“It took me an hour to find a way to cut the seat as it was made of hard plastic,” Neto wrote on Facebook.

Do you fall in love with the “petty” crime of Rocky? The sneaky dog makes his own adventure and causes trouble but also brings laughs to his family.

What Happens When Corgi Falls In Love With Other Breeds, Showing in 23 Photos

So Eager To See Their Little Human Sis, Big Brother Dogs Keep Watching Eyes On Her Inside Mom’s Belly