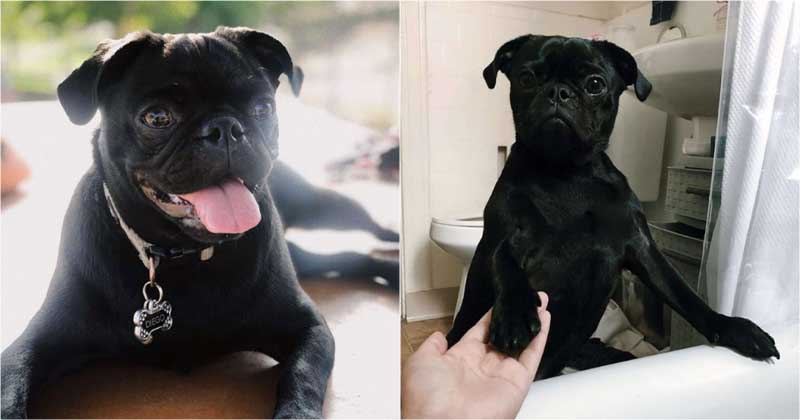 Have you met someone who don’t like doing something but always comfort those that have the same experience? They try to be ok to help their loved ones deal with the problem. Such a great work! That’s the story of Diego- a happy-go-lucky pug. He hates baths but won’t stop comforting his mom whenever it’s her turn. Let’s scroll down to know more! Diego has been struggled with bathing. He just hates it.

He is scared of the sound of water filling the tub and the sight of suds. The pup screams and cries every time he takes a bath. But that’s not all. “He’s always hated when I take baths and he would scream cry the whole time,” Muñoz said.

Diego supposes that his owner possibly feels the same, so he decides to give her some comfort. How? “He started offering me a paw,” Muñoz said. Although the pup detests the bath and the bathtub, but he sticks by anyway. He just doesn’t want his mum to face it alone. Such a good boy!
“It’s very heroic and noble of him!” Muñoz said. Diego might be a little misguided of his mom’s thought of the bath time but his concerns are worth praising. He helps his mom with all he could. Pretend to be not scared of the bathtub and stand by it whenever his mom takes a bath. This’s enough to steal the heart of his mom. And this strongly proves that it’s always great to get at dog at home, even if he is imperfect.

This Is Baby, The Corgi Who Loves Everyone And Has A Feisty Personality

Dog Abandoned On The Streets Gets Rescued And Given New Life

10+ Cats And Dogs Whose Relationships Are Full Of Love, Support, And Respect