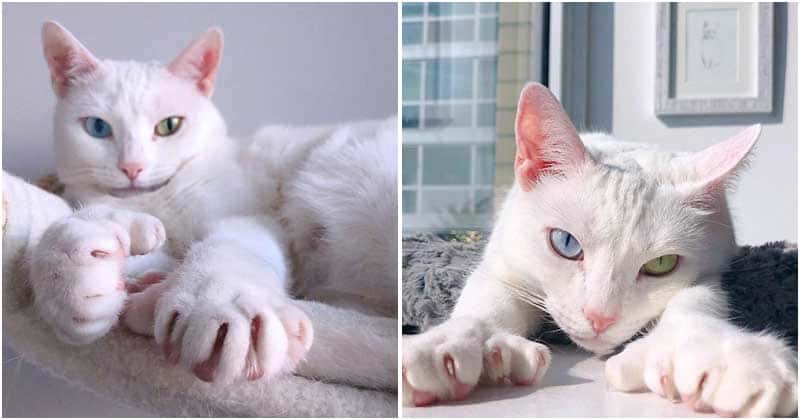 Sansa is a five-year-old snowy cat from New York City who was neglected and abandoned by her previous owners when she was just 1.5 years old. Fortunately, she finally found her forever home and her new owner Karen who adopted her and helped her become a social media star. Now, Sansa gets lots of love and attention on Instagram. ‘Many people have expressed how much they love Sansa’s uniqueness with her different colored eyes and extra toes,’ Karen said. She was born with rare condition heterochromia which means she has two different eye colors – one blue and one green. Also, she has polydactyly – she was born with extra toes. She has 6 digits on her front paws and 4 and 5 digits on her back ones. Scroll down to learn more about the adorable cat! In an interview with Bored Panda, Karan told that she and her husband Jack adopted Sansa in July 2016 when the little girl was 1.5 years old from an adoption event at a Petco in Manhattan. “We were told that she was abandoned by her previous owners, but we don’t know the reason why. She is now 5 years old, turning 6 on December 1 (her guesstimated birthday since she had no records),” Karen told Bored Panda. According to Karen, it took Sansa several months to adapt to life in her new home. “She was extremely fearful and timid at the start – whenever one of us opened the front door, she would bolt and flee into the closet or behind the TV console. She started to trust us after a few months and slowly started chilling closer and closer to us.” Sansa loves following Karen and her husband around their house. She never fails to claim her spot on their laps and knows how to get exactly what she wants. She absolutely loves treats and will model for them. “That’s how I get my photos of her!” “When she’s hungry and wants to be fed every evening, she will make sure to lay herself stretched out right in the middle of the hallway to block our way to the kitchen, staring at her empty food bowl,” Karen revealed. “In the morning when she wants breakfast, she’ll meow nonstop and if we don’t wake up, she’ll jump on our nightstands and start knocking objects off one by one till we wake up!” The owner continued: “She started off by placing a paw on my leg. A few days later, she would get more comfortable and place her head on my leg. When she eventually found the courage to sit on my lap the first time, I literally cried!” “She is still jumpy and gets scared by thunderstorms, unexpected loud sounds, dogs barking outside, etc. She will creep away and hide in a dark corner. Whenever we need to take her to the vet, she completely shuts down in her carrier and we can feel her body shivering. She has come so far though!” Now, Sansa has her forever home that she deserves. Karen and Jack hope to raise awareness about adopting special needs and genetically different cats like Sansa. If you love Sansa, you can check out her Instagram page to see more her pics and videos. Please share photos of Sanra with your friends and family members!