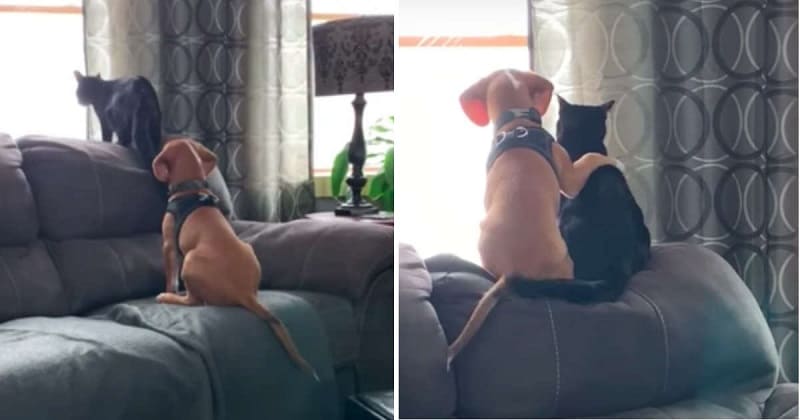 Bo is a 5-month-old Lemon Beagle, who lives happily with his mom Lisa Olsen-Plummer and his 10-month-old feline sibling Jasper in Indiana. According to Plummer, when Bo met Jasper for the first time, the two didn’t seem to care about each other. Although she knew they’d need some time to get used to each other, she never expected that they could become best friends. Lisa shared that Bo was very timid, especially around a cat, so he usually spent his day hidden. The brother Jasper also showed that he didn’t like this tiny new addition to his family. With Bo’s personality and Jasper’s attitude, Lisa just hoped they could live peacefully in the house together. “Jasper was very cautious of Bo at first,” Olsen-Plummer told The Dodo. “He stayed back and watched from a distance until one day, he went up to Bo and put his arm around him.” From that moment on, the two have been as close as can be, constantly playing together.

“They play hard and instigate one another,” Olsen-Plummer said. “Sometimes, it causes a fight and I make them split up — just like kids.”

But everything was more adorable when Plummer captured a heartwarming moment of Bo cuddling up to Jasper while sitting on the couch and watching birds playing outside together. She shared the adorable video on Facebook and it has since gone viral. Not surprisingly, people fell in love with the cute and sweet pair and couldn’t stop watching their video.

You can watch the adorable moment here:

As you can see in the video, Bo jumped on the sofa and sat next to Jasper. He then hugged Jasper and showed him some love in the sweetest way.

“They were enjoying the sunny day watching the birds,” Plummer said. “I was super excited to catch this beautiful bonding moment of two animals showing love for one another.”

Love this sweet video? Please share it with your friends and family members!

Dog Does The Sweetest Thing To Comfort His Sick Brother

20 Photos That Show Cats Are Not Always Nice And Fluffy