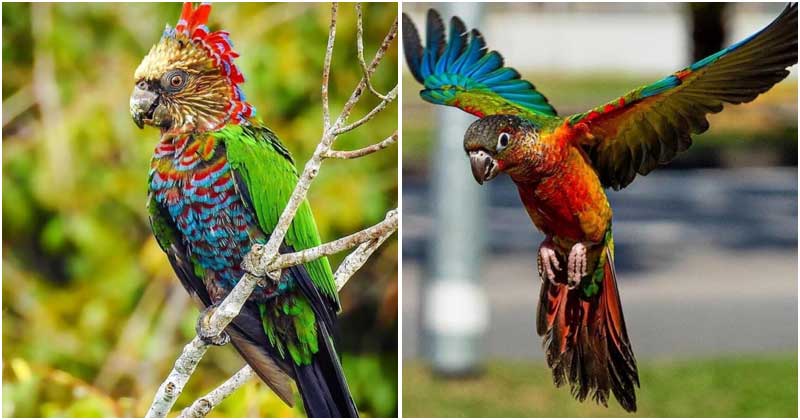 The plumage is without dispute the most conspicuous feature of the birds. It defines how unique these creatures are and makes a name for them in nature, too. Amazingly, there are many birds to be gifted with a one-off-its-kind suit. They shine in the way they are supposed to do. And we, humans, can’t keep our eyes off these striking birds.

Many parrots have vibrant, stunning good looks. Different vivid hues splash on their plumage, making them flaming balls in the wild. The red-fan parrot is a typical example. The male is known for his green wings, red neck fan with blue edges, and brown face with whiteish streaks. His chest and belly are also red with blue streaking.

His tail is greyish-black and his feet are grey.

Unlike many other birds, the female of the red-fan parrot looks similar to the male. They are virtually indistinguishable from one another.

They are an unusual New World parrot and also called the hawk-headed parrot.

This captivating species is native to much of South America, particularly in the Amazon Basin, from the Guanas and the eastern part of northern Brazil. They also distribute in southeastern Colombia, northeastern Peru, and southern Venezuela.

Despite a wide range, red-fan parrots are now listed as a threatened species due to caged bird trade and habitat destruction.

They prefer living in forest and savannah woodland that are up to an altitude of 400 meters. These habitats enable them to feed on canopy fruits, especially palm fruits and guava. These birds also eat seeds, flowers, nuts, and any vegetable available nearby.

These gorgeous parrots breed from November to April. After finding mates, the female builds her nest in abandoned woodpecker holes at an altitude of 10 meters. She then lays 2-3 eggs in her nest and incubates them for around 28 days. She continues to feed the chicks until fully-fledged, about 9-10 weeks.

10+ Sassy Pet Photos That You Will Burst Out Laughing

Trapped In Poacher’s Snare For 4 Days, Rare Baby Albino Elephant Was Rescued And Made An Incredibly Recovery

15+ Animal Photos That Show The True Essence Of Being Parents