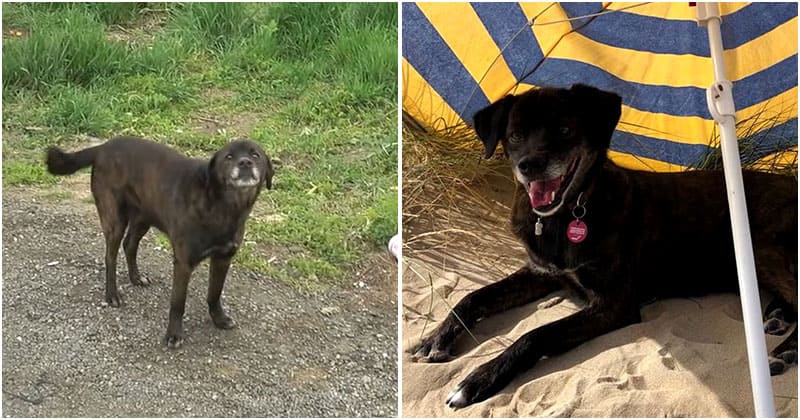 Rescuers at Howl Of A Dog were driving through a busy road, when they spotted an abandoned dog standing on the side of the road. It was dangerous for him to wander on the busy road full of cars. Knowing that the dog was in need of help, the team immediately stopped their car and rushed to save him. They had to act quickly as a heavy rain storm was coming.

When the team approached the dog, he was scared and barked at them. But a few moments later, he calmed down and turned from defensive to curious. After realizing that the rescuers are good people and would not harm him, he started trying to ask for help. He was so hungry, so the team gave him some snacks to fill his empty belly up.

The cars kept passing with high speed on the road, so the rescuers tried to gain his trust to make sure that he wouldn’t suddenly run towards the busy road. They decided to call him Mowgli, a little dog in a big jungle. They quickly put him in a carrier and drove back to How Of A Dog home before it started raining heavily.

Mowgli was worried and timid at first, so they let him settle in at his own pace. He still needed more time to adapt to his new home. As soon as he felt better, he was taken to a vet hospital, where he received medical treatment and care. The vets also scanned him for a microchip, but he didn’t have one. After getting all the necessary things he needed, he returned to his home.

Thanks to all the love and care of the staff, Mowgli slowly recovered and adapted to his new life with his best furry friends. After one month, he finally found his perfect loving home. A great family in Germany fell in love with him and decided to adopt him.

We are happy to know that he is enjoying his best life at his forever home. He has adjusted very well and has lots of fun living here. Despite being a senior dog, he has the spirit of a young puppy. He likes to play and cuddle with his humans with eyes full of love and hope. His family loves him very much and says that he’s the sweetest dog ever!

Watch the video of Mowgli at his forever home here:

What a beautiful and gentle dog! Thank you for saving him and may he find his forever home! Thank you so much Angelika and Jan Willem for adopting Mowgli and offering him such a beautiful life!

Scared Shelter Puppy Hugged Her Best Friend Before They Were Put Down, Then A Miracle Happened