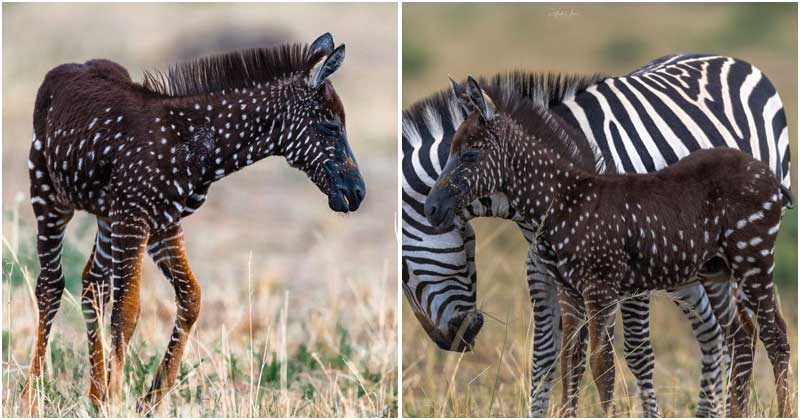 There are many extraordinary animals in the wild. They were born with one-of-its-kind features due to a genetic condition. In other words, they are different from other members of their species, making them easy to be spotted in their community and predators, too. And they will shake our world a little when they appear. Recently, an incredibly rare baby zebra with polka dots was captured on camera on Maasai Mara National Reserve in Kenya. You can watch the video of the adorable dotted baby zebra below.

The foal has polka spots instead of white stripes! It doesn’t jump out from fairy books. It does appear in real life. Rahul Sachdev and Antony Tira, photographers and also tour guides at the park spotted the adorable creature. They were astounded at first but they didn’t miss the once-in-a-lifetime opportunity. They took out their camera and snapped beautiful pictures of the rare zebra with its parents. When they shared these photos on social media, they went viral. People can’t get enough of the cuteness of the dotted colt. Regarding the polka dots all over its body, they are thought to be the result of melanism, which is the opposite of albinism. Parmale Lemein, a wildlife specialist from the Matira Bush Camp, shared that it was the first such case of a polka dot zebra at the Mara Reserve.

However, there was some sad news that none of these animals could survive in six months in African parks. If you want more people to notice this rare and precious dotted zebra, just share the article with your family and friends. They will burst out “aww”. Believe us!

20 Photos That Prove Love Comes In All Sizes And Shapes

10+ Animals That Deserve To Be Called A Hero

A Tiny Bird That Somehow Manages To Squeeze Seven Different Hues Onto Its Tiny Body Creating A Dazzling Rainbow Of Color!

10+ Poor Animals That Were Totally Transformed By Love And Care