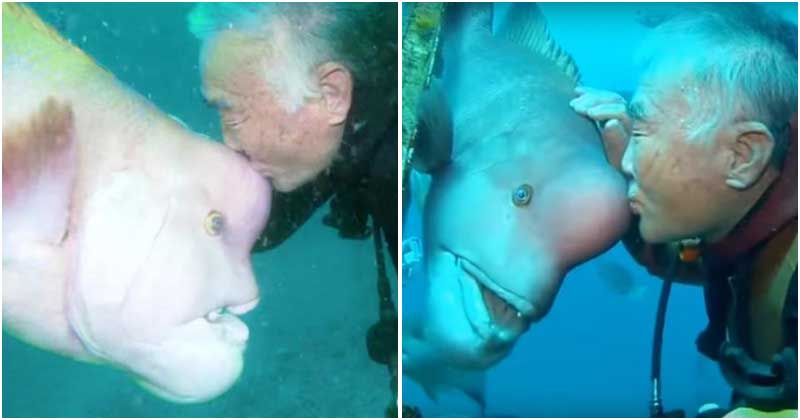 We have heard many heart-warming friendships of humans and their pets, or even wild animals. Pets are adorable, friendly, and affectionate while wild animals are grateful for humans who treat them well. They can sense your love, care, and kindness, so they will give you the same. A special bond grows up naturally. But when it comes to the friendship of an old man and a fish, everything changes. Many people think that it’s impossible and unreal. That beautiful bond only happens in fairy books. If it does, it will be one of the most marvelous things on the planet. And it does happen in real life, guys. A Japanese diver has befriended a friendly Asian sheepshead wrasse fish for 25 years.

Hiroyuki Arakawa (name of the diver) met the fish that he named Yoriko while he was at work.

The man was assigned to supervise a ‘torii’ – a sacred shrine to the Shinto religion. But the special thing about the shrine is that it is located beneath the surface of Japan’s Tateyama Bay. This required Arakawa to dive frequently into the shrine to explore marine creatures living there.

Arakawa kept doing his work for about 10 years and he randomly met Yoriko, a friendly Asian sheepshead wrasse. The diver and the sea creature formed a lovely friendship and they “kept in touch” for 25 years now. Every time they meet again, Yoriko will give its human friend a big kiss. It’s the prettiest greeting it could do to show how much it loves and misses its friend.

One of their sweet visits was captured on film and shared on social media. It went viral as people amazed at the affection of the fish. It could remember the face of its human friend. A recent scientific study carried out by scientists at Oxford University proves this. The fish remember up to 86% of the human face that the scientists presented to it.

If you are looking for something positive at this uncertain time, just give this article a look. Humans and the fish can be friends!

Stunning Plumage Of Yellow and White Flecked With Densely Black, Speckled Tanagers Stand Out In The World Of Birds

Covered In Astonishing Blue Shades, The Crowned Pigeons Are The Largest Pigeons That Ever Spotted In The Wild

Photographer Tiptoes Through The Tulips To Shoot Harvest Mice, And The Result Will Make Your Day