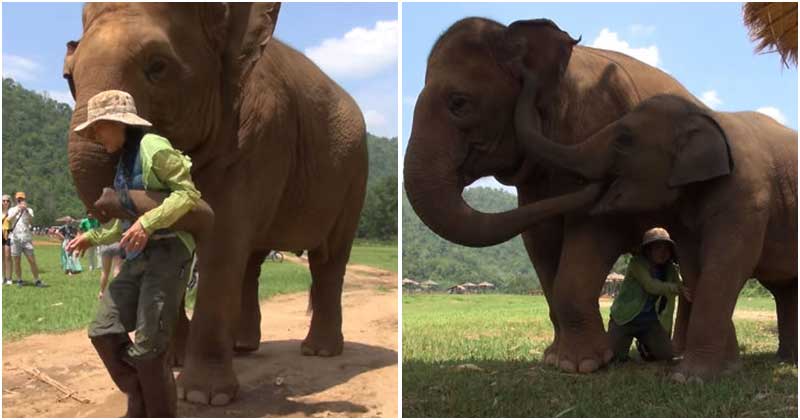 The elephant is one of the most adorable and affectionate animals in this world. They look like giants but still keep a puppy and warm soul. They always love the cuddles and pats of their human friends. Like many pets, they may commit “petty” crimes sometimes but act innocently. I’ve seen a photo of a baby elephant hiding behind a pole when caught eating sugarcane. That’s why these cute creatures can build a special bond with their human friends. They trust their human and find it happy to let them join their world.

Faa Mai the elephant in this story is an example. The sweet and gentle girl is currently living at Elephant Nature Park in Chiang Mai province, Northern Thailand. She loves her caretaker so much and can’t wait to introduce her to her new little friend. When Lek Chailert, Faa Mai’s caretaker was talking to tourists, the elephant approached her, and gently pushed everyone away.

The caretaker was confused at first. She only knew that the elephant wanted to take her somewhere. Faa Mai even wrapped her trunk wrapped around her waist. As it turned out, the elephant wanted her Lek Chailert to sing a lullaby to her new little friend, a rescued elephant calf. The caretaker often does this for her and she really enjoys it. The lullaby can heal and comfort her and she thinks that her new friend also loves it. Faa Mai wants to give little Thong Ae the same amount of love that she received from her caretaker.

All these heart-warming moments were captured in a video and shared on the Internet. It went viral as people couldn’t get enough of the elephant’s cuteness, persistence, and kind hearts. You can watch the loving video below.

“In the end, it seems as if Faa Mai wanted me to lullaby her little friend, as she is so fond when I sing a lullaby to her. It is so beautiful to see my little girl who has such a heart of care. I am so proud of this girl!” reads the description of the video. 20+ Hungry Pets Who Will Do Anything To Get Food

15+ Furry Bandits That Love To Steal Food From Distracted Humans

20 Inventive Pets Who Always Want To Be By Your Side

20+ Cute Pics Of Baby Donkeys That Will Melt Your Heart