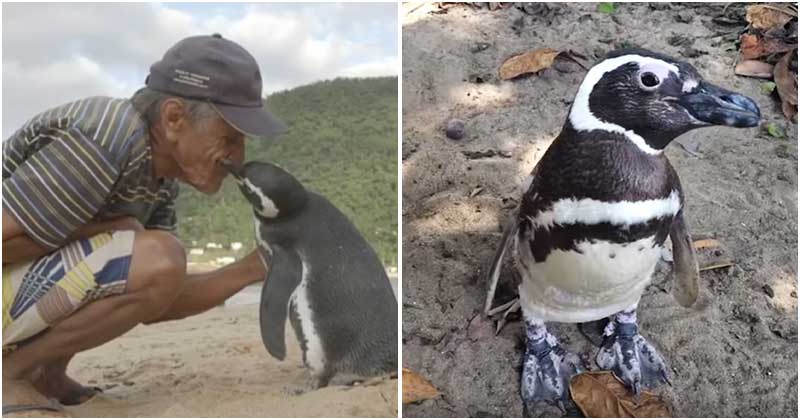 Wild animals can be affectionate and grateful. Some people may get doubted about this. But they will change their mind when hearing a true story. No script. No flossy words. And this article shares such a heart-warming story. An adorable penguin named Dindim swims over 8,000km every year to see his rescuer and old human friend.

71-year-old Joao Pereira de Souza is the human friend of Dindim the penguin. He is a retired bricklayer and part-time fisherman living on an island off the coast of Rio de Janeiro, Brazil. Pereira de Souza saved Dindim in 2011. The poor animal was washed up on the shore, starving and covered in oil.

The old man didn’t hesitate to bring the penguin home and cared for it until it’s strong again. He cleaned its tarred feathers for over a week, fed it with fish. When Dindim was ready to go back to his colony, Pereira de Souza took him to the sea. However, Dindim didn’t leave immediately. The penguin stayed with his rescuer human for 11 months and built a special bond with him. Until he had a new coat, he disappeared.

Amazingly, the penguin returned. He missed his human friend and was grateful for what he had done for him. Dindim has been swimming over 8,000km from his home (Patagonia coasts of Argentina and Chile) to meet the man. He has done this since 2011.

Watch the video of the adorable penguin below.

“Everyone said he wouldn’t return but he has been coming back to visit me for the past four years. He arrives in June and leaves to go home in February,” Pereira de Souza said.

The penguin would wag his tail, honk with delight, and ask his human friend for cuddles. He laid on his lap and let the man give him showers and feed him. In Brazil, it’s illegal to keep wild animals as pets. But the case of Dindim and Pereira de Souza is an exception. The authorities allow the penguin to stay with the man because of his kindness.

If you love the beautiful friendship of Dindim the penguin and his human friend, just share the post with your family.

Meet The Pink Robin, The Little Ball Of Joy So Beautiful, Many Think It’s Too Perfect To Be Real (15 pics)