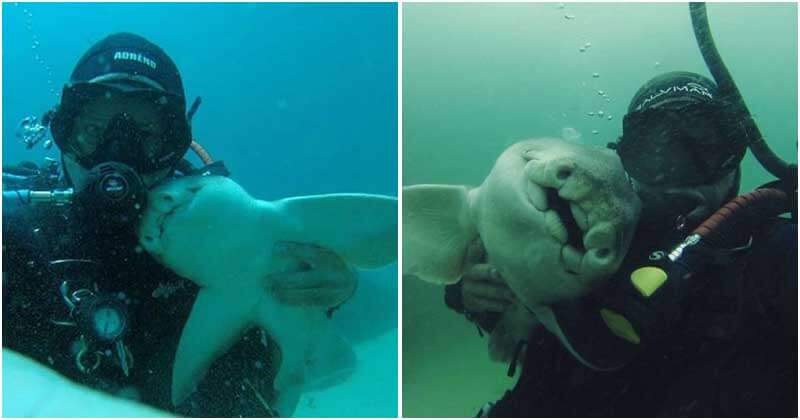 Sharks can be friendly, adorable, and a lovely friend. The Port Jackson shark in this story just strongly proves it. The big fish finds her way to express her love to her human friend. Swim up to him and ask for cuddles every time she sees him diving nearby. Nick Anderson, an Australian diver is the shark’s friend. The two first met 7 years ago when the shark was just a pup. The man decided to gently approach the animal, tap, and talk soothingly to her. “I approached her carefully so as not to spook her, then began to gently pat her. Once she got used to me, I would cradle her in my hand and talk soothingly to her through my regulator,” he said to The Dodo. Nick and the lovely sea creature have built a special bond since then. He even named his shark friend and he can recognize her through her markings. Many of us will not believe in this lovely friendship until seeing these photos. Humans and sharks can be friends. It’s pure and priceless. Every time Nick goes diving, his shark friend comes to him to ask for a pat and cuddle. This greeting has never changed over the past 7 years. “I don’t feed her or any of the other sharks. She got used to me – to the point where she will swim up to me when I’m going past, and tap me on the legs until I hold my arms out for her to lay on for a cuddle.” Rick said. If you love the “weird” friendship of the playful shark and the diver, just share this post with your family and friends. Animals can sense our love for them.

15+ Animals Who Were Caught In Bad And Awkward Moments