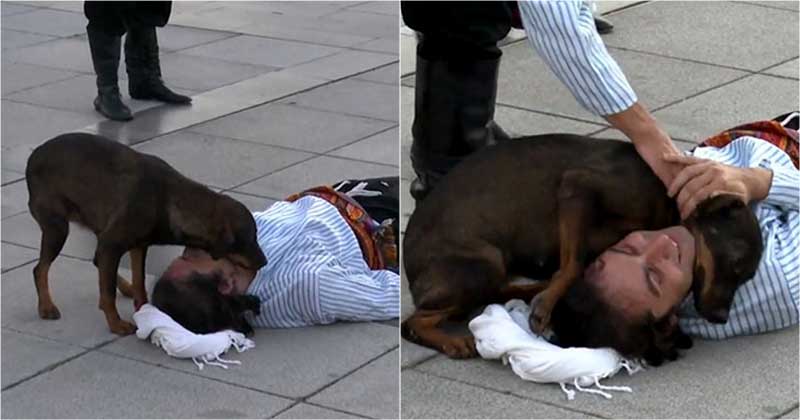 Dogs are truly our best friends. They not only help us in daily life but also comfort us. They can’t say comforting words but will show their love and care for their parents and friends through their behaviors and gestures. Many dogs are even professionally trained to do human’s jobs. Therapy dogs, guide dogs, police dogs, you have met them, right? The action of the stray dog in this clip will melt your heart. He interrupts the performance to comfort actor pretending to be injured. “I was very touched. He was like an angel who wanted to help me.”

During a recent theatrical performance in Turkey, the script called for actor Numan Ertuğrul Uzunsoy get hurt, laying on the floor. Of course, the injury was pretense. While people were watching a street performance, this dog was living it. He made an adorable reaction.

“The character I played was injured and in great pain,” Uzunsoy spoke to The Dodo. “He’d fallen off a horse, and was breathing hard.” As Uzunsoy lay on the ground, his pretend suffering didn’t go unnoticed. But a four-legged audience member wasn’t entirely sure. From a wing, the stray dog made his entrance — interrupting the play to comfort the “injured” stranger. “I felt warmth on my face. First, I thought my costar was approaching me,” Uzunsoy said. He was wrong.

When Uzunsoy realized the truth, he couldn’t help but break character. His face gave way to a smile.

“I was very happy when I felt the dog’s kisses,” Uzunsoy said. “I was very touched. He was like an angel who wanted to help me. It was a very emotional moment for me. I was not expecting it.” No one in the crew seemed to mind that pause in the action. Rather, the reaction to the pup’s interruption was quite the opposite.

“My castmates loved the dog, and the audience was very happy,” Uzunsoy said. “Everyone cheered.” The stray dog was eventually escorted offstage by a crew member, where he remained awhile before strolling away. The actor hopes their meeting that day is just the first of many acts to come. Uzunsoy wants to the see the pup gain and help him find his forever parents, returning the favor for the kindness he’d shown Uzunsoy.

“The next day I went to the same place, looking for him. People told me he usually hangs out there. I went again today,” Uzunsoy said. “I’ll look for him until I find him. I’ve always loved animals.”

Artists Photoshop Animals Into Famous Paintings And The Results Are Awesome

Photographer Tiptoes Through The Tulips To Shoot Harvest Mice, And The Result Will Make Your Day

Kittens Discover A Heated Foot Warmer, And It Couldn’t Get Any Cuter

Pomeranian Does Not Agree To Be On Diet, Having A Strong Response To It

20+ Animals Who Don’t Know How Special They Really Are