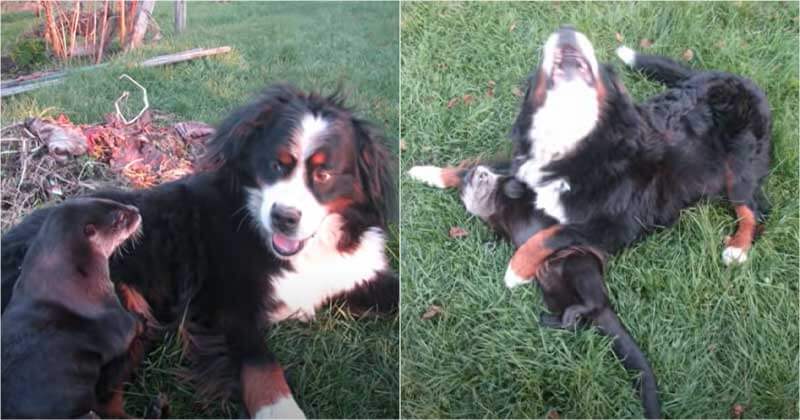 The friendship between animals is pure and beautiful. They can become best friends even when they do not have the same species. The Bernese mountain dog and the sea otter in this story are a great example. The pair were seen playing happily on the grass together. Heidy the dog and Loulou the river otter grew up together, becoming best friends together. Loulou was found alone after a flood when she was still a baby. The poor animal was then adopted by Maxime Descoteaux in 2010. The adorable, friendly, and playful otter soon befriended Heidy, the dog of Descoteaux’s family. Bernese Mountain Dogs and otters are incredibly cute and loveable animals. When they hang out together and become friends, their cuteness can melt the coldest heart. Heidy and Loulou love accompanying each other on all adventures. The odd friends love chasing each other all around the yard until mischievous Loulou jumps in the river.

As you can see in the video, Heidy and Loulou are tussling and rolling on the grass together. It’s just one of their exciting games every day. The pair can’t hide their happiness when playing with each other. Loulou spends most of her day staying with Heidy. They play together and never get bored with it. Their bond is tightened and tightened every day. Nothing is better than a good friend who experiences the good time and bad time with us. The born-cute otter really loves her doggy friend and her adopted family. She was given a second chance for a happy life and she grasped it. There is a river near Loulou’s adopted family. The playful otter is free to come and go as she pleases. However, the Descoteaux have an enclosure for the otter so she has a place to sleep at night.

10+ Photos Of Animals Who Have A Great Friendship

10+ Pets Who Think Reading Is Stupid And Books Are Dumb