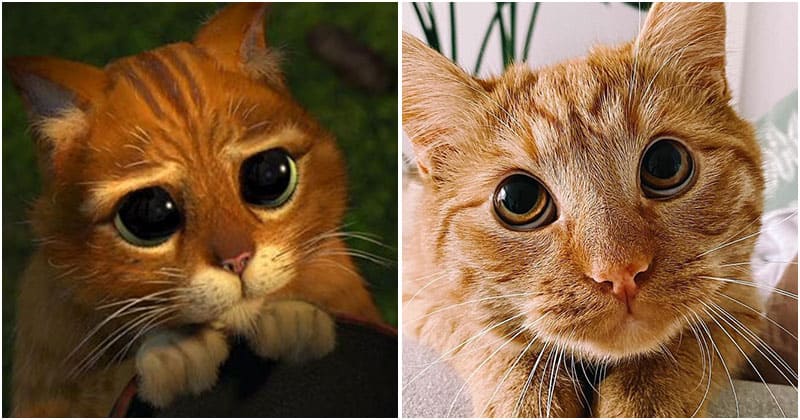 Anyone who has ever owned a pet knows that clever pets seem to find their own ways and learn new tricks to get what they want. Meet Master Poe Poe, a ginger cat who is called a master of manipulation as he is able to take all his treats and probably yours, too. Whenever this eight-month-old cat wants something, he will do a spot-on impression of Shrek’s famous Puss in Boots’ innocent face. He looks at you with wide sad eyes and he even uses his paws to beg you. And of course, no one can resist his cuteness! “We adopted him when he was 8 weeks old. He’s very playful, sweet, and clingy. He likes cuddles, he cries every morning until we wake up and give him attention. He likes to lay in his bowl. He is very expressive and has lots of facial expressions,” the owner shared. When Master Poe Poe doesn’t need anything from you, he looks like: Master Poe Poe became famous on social media after his owner Deborah De Asis from The Netherlands shared a video of him on TikTok. The video quickly went viral with over 146.9k views and hundreds of wholesome comments. Most of them demand to give Master Poe Poe what he wants immediately. Watch the video below to see his cuteness and talent:

If you love Poe Poe, you can follow him on Instagram or TikTok to update his photos and videos.

Wearing A Speckled Coat And Having Emerald Green Eyes, This Bengal Cat Is Worth Your Attention

15 Of The Weirdest Things Cat Owners Have Come Home To