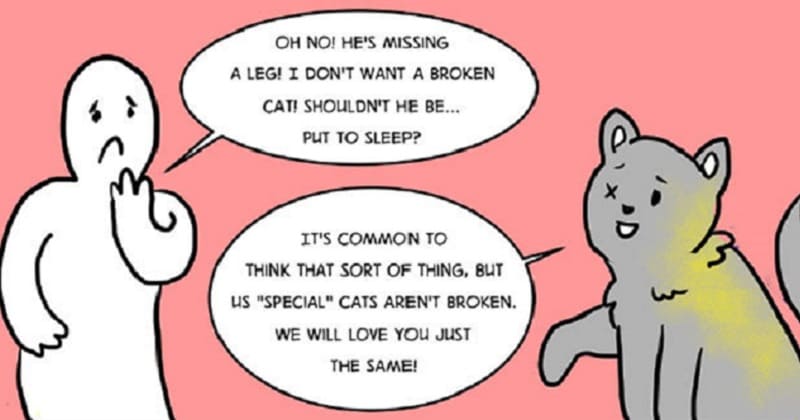 Brittney is an artist and a cat owner who loves to create cute comics about unadoptable cats. Through her comics, she wants to show people that adult and disabled cats are cute and deserve to be adopted. Not only does she help people understand about poor cats, but she also uses 50% of her online store‘s sales to donate to cat adoption facilities.

She said the inspiration for the comics came from a story she heard a while ago. A dad refused to buy his daughter a cat as it had 3 legs, and it broke her heart. “A family went a cat shelter to adopt. The daughter fell in love with a 3-legged cat. The father straight up said “absolutely not”. Because he was missing a leg. That cat was that close to having a family that loved him, but the missing leg held him back,” she wrote on her Tumblr page. For this reason, she decided to create comics of ‘imperfect animals and the stigmas about them. She wants to show everyone that ‘less-adoptable does NOT mean less lovable’.

“I get it,” wrote Brittaney, “But less-adoptable does NOT mean less loveable. All I want people to do is be open to the idea of having an unusual cat or a “different” pet in their lives. Choose the pet that you fall in love with, but at least give all of them a fair shot at winning your heart.”

Scroll down below to see Brittaney’s cute and touching cat comics and shared the stories of your own cats with us in the comments below! Meet Starlight, The Sunburned Kitten Grows Up To Be Gorgeous And Fluffy

10+ Wacky Felines Who Failed At Being Cats

9 Signs Your Cat Truly Loves You

He Looks Like A Normal Cat, But If You Take A Closer Look… This Is A Miracle!

Dogs Find Cats Sleeping In Their Beds, And Their Actions Will Have You In Stitches