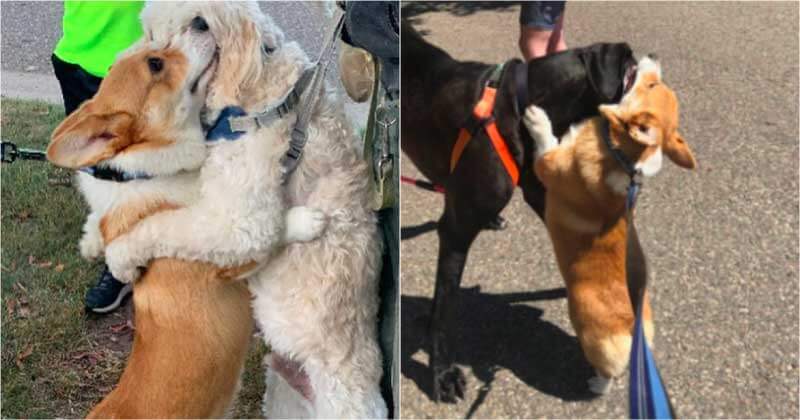 Sometimes, small caring gestures and actions can warm up us faster than a rocket. These sweet surprising things are enough to make our day and spread positive energy. This loving corgi does the same. The sweet boy gives every dog he meets a big hug while on his walk. Scroll down to know more!

The loving dog in the story is Wallace. He knows how to make things better — with a big hug. And he goes for it immediately. When Wallace is walking with his owner Noah Raminick, he will stop every time he spots another pup. The loving boy is really excited about playing with new doggie friends and will never let them go without giving them a big hug, literally. This actually heals his friends, and humans around him, too. Wallace also deserves to be called a good boy. He plays with new friends, especially smaller ones gently. He doesn’t spook them. Wallace is also a polite dog. He won’t go in for the hug until he sniffs out whether the other dog is OK with it first. Wallace hugs every dog me meets, even those that are bigger than him. It is strange that the low-bodied pup shows no fear to these big guys. Instead, Wallace stands on his hind legs to give them an embrace in the best way he can. Wallace has a best friend, a Great Dane, named Daisy. He even doesn’t find it hard to give his friend a hug. “They always hug when they see each other,” Raminick said.
If you are looking for heart-warming stories of dog, just give these a look. Love and care can make this world a better place.