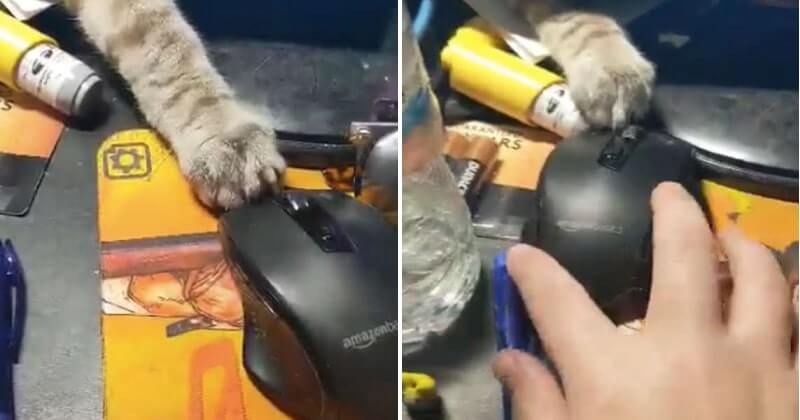 Brenna Telaroli first met Mokou the cat when he was an 8-week-old kitten. He was sick and needed emergency surgery due to being born with a large umbilical cord hernia. At first, Telaroli was worried about Mokou’s condition, but when she saw his beautiful blue eyes, she knew she couldn’t resist him and would do anything for him. Under the love and care of Telaroli, Mokou made an amazing recovery and now he is completely healthy and is full of personality. However, this be a little difficult to handle when Telaroli’s working from home.

Mokou always tries to distract his mom from work. He wants her attention all the time. “For starters, he is a major talker,” Telaroli told The Dodo. “He has something to say about everything, including when I am at work trying to talk to customers.”

Mokou loves his mom so much that he will do anything to distract his mom from work. He wants his mom to focus on him instead of working. And of course, he’s usually successful. “He loves to play — that is all he wants to do when awake,” she said. “He is either throwing his toys in the air to catch or running like a madman from room to room.”

He constantly supervises his mom to ensure that she always pays attention to him. “He has to be where I am and see what I am doing at all times,” Telaroli said. “Mokou feels it has to have his stamp of approval or he will have a meowing fit.” When his mom is working on the computer, Mokou grabs the mouse to get her attention. He will play tug-of-war with the computer mouse with the hopes that it can distract his mom. And once he touches the mouse, he refuses to give it back. He doesn’t want to let his mom use it.

“It’s him saying, ‘Mom, stop working and play with me or I’ll play with what you have until I get my way,’” Telaroli said. “When he has his mind set there is no trying to distract him from his course.”

Mokou can be a coworker, but Telaroli never gets mad at him. Just looking into his eyes, she can’t help but take a break from work to play with him.

Then And Meow: How Technology Has Changed Cats’ Lives

Someone Is Replacing Musicians With Cats In Famous Album Covers, And Result Is Better Than Original

20+ Photos Proving That Cats Can Walk Wherever They Like