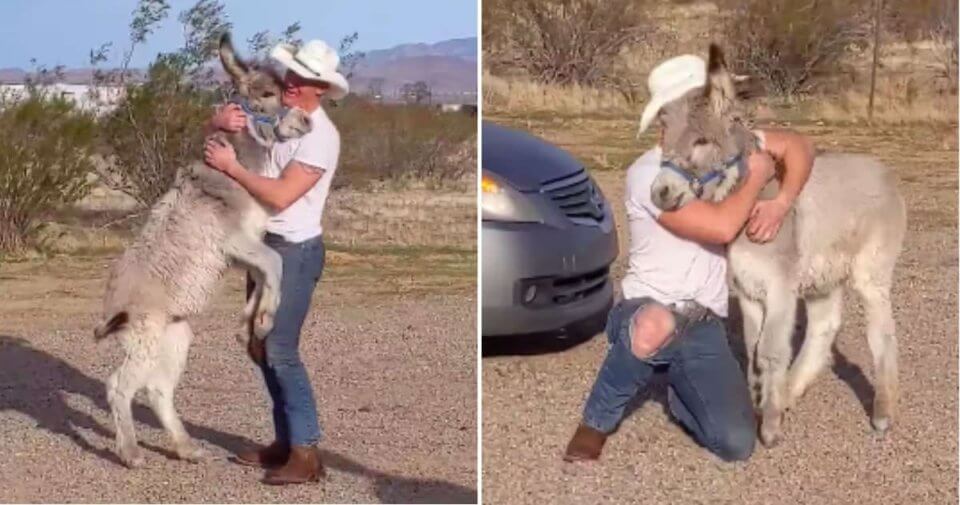 Walter is a sweet donkey who lives with his parents and three German shepherd siblings in their home in Oatman, Arizona. Growing up with a bunch of dogs, it isn’t surprising that Walter has learned some unusual habits and acts just like a dog. But this does not matter to his parents, and they still love him so much. His owners, Kelly and Brad Blake, took him into their home after they found him abandoned in the barn. “Walter’s mama rejected him because she was too young. The Bureau of Land Management and town locals tried for 10 hours to get Walter’s mama to take to him. Nothing was working, so we were called and asked if we would like to adopt him. Of course, we said yes!” The couple brought him home and let him bond with their three German Shepherd dogs. It didn’t take long for Walter to adapt to what his new life would be. He quickly connected to his new parents – especially his father.

Posted by Walter the orphan from Oatman’s happy new life on Saturday, January 18, 2020

With all the love and attention of his parents, the sickly little donkey has grown to be a 150-pounds. His dog siblings even raise him and teach him house manners. For this reason, he acts and thinks as if he were another one of the dogs. However, Walter’s dog-like personality really comes out whenever his dad Brad returns home from a business trip. As soon as he sees his dad, he comes running towards him, wags his cute little tail, and nuzzles his shoulder. “Walter acts as though he is a dog,” Blake said. “He wags his tail and gets excited when we come home. He hops and brushes his body against me to love on him. He even lays on the couch next to me for naps.”

Watch the video below to see Walter and his parents’ adorable reunion:

Posted by Walter the orphan from Oatman’s happy new life on Sunday, January 5, 2020

Walter’s parents help him become a valuable member of the local community. He works in several beneficial organizations, and he also volunteers as an emotional support donkey. Walter has also gained a lot of fans, so his parents often share his daily adventures on Facebook to make sure his fans will update his latest adventures.

20 Pics Of Animals Who Are Masters Of Stealth

20+ Pets Who Can Express Their Emotions Better Than Us

10+ Pet Photos That Can Fill You With Love And Laughter

People Living With More Than 3 Pets Reveal What It’s Like, And It’s Truly Hilarious!

20 Animals Who Rely On Humans For Support

Noisy And Curious, The Green Jay Is The Gossipy Neighbor That Makes Our Life Way More Interesting