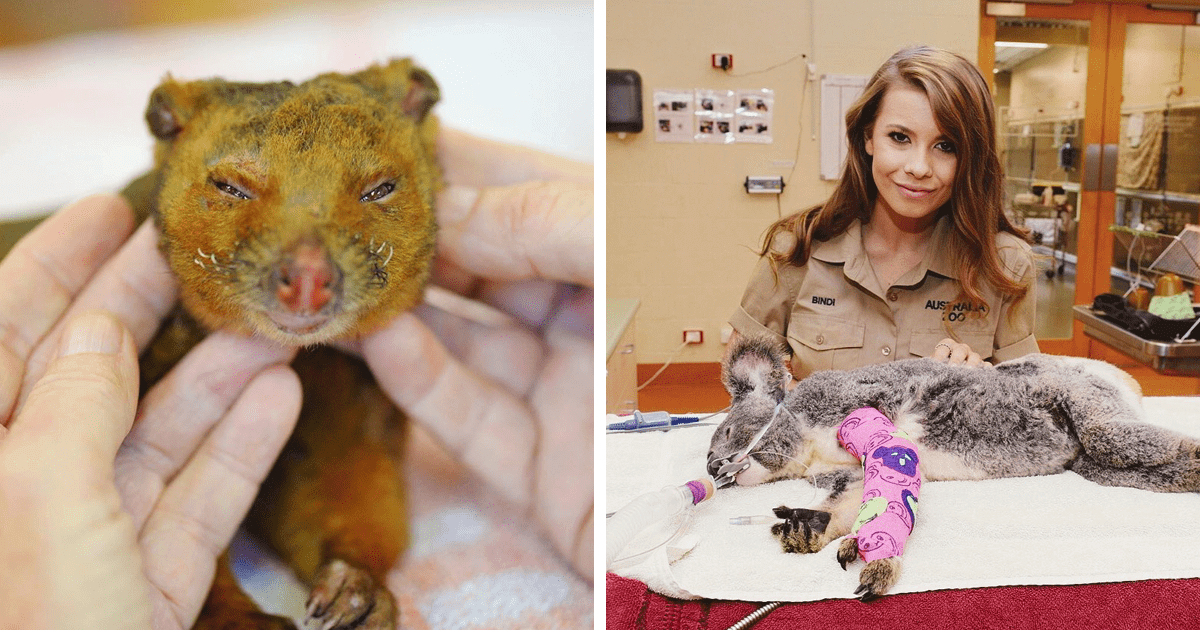 Do you know the legendary photographer Steve Irwin and his family?Although Steve Irwin passed away in 2006 after being injured by a stingray, his legacy and love for the animal kingdom live on through his family members. Terri Irwin, the widow of Steve Irwin, and their children, daughter Bindi and son Robert Irwin, follow in Steve’s footsteps by raising awareness about the importance of protecting nature. The family now owns and operates Australia Zoo’s and Australia Zoo’s Wildlife Hospital. They even travel around the world to spread the message of protecting and helping nature to everyone. For this reason, when the bushfires rage across parts of Australia, the Irwin family immediately stepped in to rescue and save wildlife in danger. Wildfires in Australia is not rare phenomenon, but now this country is being ravaged by the worst wildfires seen in decades. According to Sussan Ley, the federal environment minister, the animals are now considered endangered and wildfires have destroyed up to 30% of their habitat. Bindi Irwin, a young conservationist, late Steve Irwin’s daughter, went on social media to announce that her family is safe and doing everything they can to help the animals in need. She and all members of her family have now rescued and treated more than 90,000 animals in Australia’s recent devastating wildfires. “With so many devastating fires within Australia, my heart breaks for the people and wildlife who have lost so much. I wanted to let you know that we are SAFE. There are no fires near us @AustraliaZoo or our conservation properties. Our Wildlife Hospital is busier than ever though, having officially treated over 90,000 patients. My parents dedicated our Australia Zoo Wildlife Hospital to my beautiful grandmother. We will continue to honour her by being Wildlife Warriors and saving as many lives as we can,” Bindi wrote on Instagram. “Wildlife Hospital takes in animals from all over Australia. Hundreds of grey-headed flying foxes, a species listed as vulnerable, have been flown to Queensland after the rescue centre they were recovering in was at risk from fire and evacuated,” Bindi Irwin posted on Instagram, along with photos of orphaned fox cubs recovering from the fire.

Our @AustraliaZoo Wildlife Hospital takes in animals from all over Australia. Hundreds of grey-headed flying foxes, a species listed as vulnerable, have been flown to Queensland after the rescue centre they were recovering in was at risk from fire and evacuated. Some of the orphans are now being cared for by the team at the hospital until they’re big enough to go home, and there’s no threat of fire. ???? In September, flying fox admissions to the hospital skyrocketed by over 750% due to drought conditions and lack of food. Flying foxes are now being drastically affected by wildfires and we’re again seeing an influx of these beautiful animals from across the country. This week, we treated our 90,000th patient. To cope with so many animals being admitted to the hospital, in 2019 we opened a sea turtle rehabilitation centre, sea snake ward and are about to complete a new bird recovery area, but it’s still not enough to keep up. We need to build a new ward for our patients. Wildlife Warriors from around the world are asking how they can help us save native wildlife, you can donate on our website www.wildlifewarriors.org , or support our fundraiser to start construction of our newest ward by visiting the link in my bio! ????

In the wake of the devastating bushfire crisis in Australia, many celebrities like Pink, Selena Gomez, Keith Urban and Nicole Kidman, are stepping up to donate money for local fire services and encourage their followers to do the same. Pray for the people, animals, and land of Australia!

What do you think about this post? Please let us know your thoughts in comments below!

10+ Photos That Prove Cats Are Jerks

Kitty Hears His Favorite Song, But When He Starts Dancing… This Is The Best Thing Ever, Awww!!

These Animals Really Know How To Strike A Pose

Most People Can’t Find The Big Cat In This Photo – Can You?